The Microsoft founder who isn’t Bill Gates, Paul Allen, died in 2018 of complications from cancer. Since then, his greatest excesses – like a MiG-29 fighter jet – have been up for grabs.

The latest statement of multibillionaire indulgence to be sold is Allen’s “explorer class” superyacht – Octopus – which has gone to an anonymous Scandinavian buyer for a cool £200m, The Guardian reports. 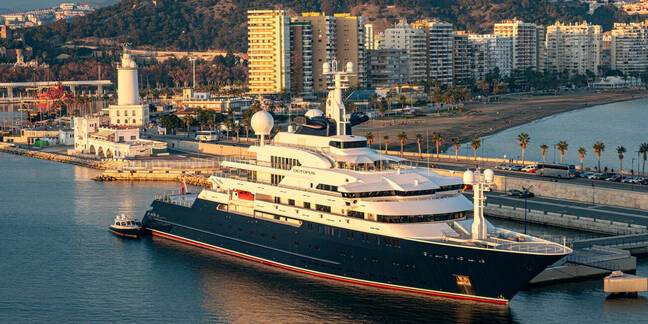 The 126-metre Octopus was the largest yacht in the world when it was built for Allen in 2003 with the additional capability of deep sea exploration. He used it to survey the wrecks of the USS Lexington off the Australian coast and HMS Hood in the Straits of Denmark, the latter sunk by the German battleship Bismarck during the Second World War.

But the mod cons do not end there. Oh no. There are also two helicopters, two submarines, seven dinghies, and an SUV, all concealed courtesy of designer Espen Øino. Throw in “54 tonnes of AV/IT equipment,” according to Øino, and that’s a lot to handle – so there are also quarters for 63 crew.

Why do we mention this? Well, the Octopus is to be made available for charter through Mayfair-based yacht broker Camper & Nicholsons. Though a rental price has not yet been set, The Graun reckons the ship could be yours for around £1m a week, going by the example of cosmetics empress Kylie Jenner, who chartered the 91.5-metre yacht Tranquility in 2019 for €1.1m to celebrate her 22nd birthday.

We’re thinking that maybe this represents a golden opportunity – someone ought to crowdfund a weeklong holiday for loyal Register readers. If we’re estimating a lower-limit capacity of 77 people (surely many won’t protest against sleeping in the crew quarters), add some people doubling up (those guest suites can probably house multiple families), let’s conservatively say… heck, 170 people? Nearly £6,000 per person. But those getting guest/private suites could perhaps foot much more of the bill.

Hey, it’d beat taking the family to Disney World again, right? Drinking and partying among like-minded individuals for a week until it all breaks down into the inevitable flame war over which Linux distro is the best, open source vs closed source, fandroids vs fanbois, electric cars vs conventional cars, or whatever it is you nerds get inordinately heated about.

Naturally, we won’t be starting a crowdfunding project ourselves – we’ve seen first hand what can happen when things go wrong. We can’t also rightly say at which point the Octopus would capsize under the strain.

So go forth, with caution, and work it out among yourselves. It is, we hasten to add, just an idea. ®

The Guardian’s report quoted Allen saying about his maritime archaeology in 2011: “It turns out if you go 1,000 ft down in the ocean, it’s really dark, and the animals are really strange. But if you put on some Pink Floyd, it’s fantastic.” Which means that while Allen was behind one of the most brutally successful software companies of all time, at least he was also a man of culture.