This article is part of Inside Our Outdoors, a series about Southeast Michigan’s connected parks, greenways, and trails and how they affect residents’ quality of life. It is made possible with funding from the Michigan Trails and Greenways Alliance.

The nonprofit Huron Waterloo Pathways Initiative (HWPI), in partnership with Washtenaw County Parks and Recreation and the city of Chelsea, has created an online crowdfunding campaign to raise money to complete an extension of the Border-to-Border (B2B) Trail into downtown Chelsea.

The B2B Trail is an ambitious effort to create a non-motorized pathway that would stretch across Washtenaw County, connecting with the neighboring counties of Wayne and Livingston.

The new 1.6-mile connector would start at Veterans Park in Chelsea, twisting through Timbertown before extending north via a road-separated path on M-52 to 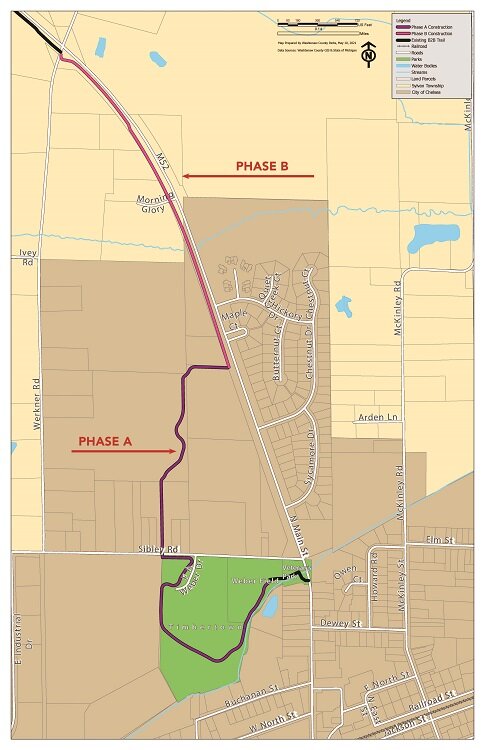 Map of proposed Chelsea B2B Trail extension connect with another section of the trail at Werkner Road.

So far the Patronicity fundraising campaign, which kicked off in July, has collected $26,150 with the assistance of 94 supporters. If the fundraising effort can meet its $50,000 goal by Sept. 15,, a $50,000 matching grant will be awarded through the Michigan Economic Development Corporation’s Public Spaces Community Places Initiative.

HWPI has been raising awareness about the fundraiser by putting up posters around downtown Dexter and spreading the word at Chelsea’s weekly summer Sights and Sounds festival. The group’s executive director, Susan Faulkner, is hoping online supporters will help the campaign reach its goal next month.

“This is primarily an online effort, and it’s also really grassroots,” she says. “We want as many people to contribute as possible. A $10 donation is very much appreciated, though we will take larger amounts. The maximum size gift is $5,000, so it’s an effort to get the whole community involved.”

HWPI got its start in 2014, after a group of Chelsea residents took notice of an existing stretch of the B2B Trail connecting the city of Dexter with Hudson Mills Metropark. A bunch of them began to meet at Aberdeen Bike shop in Chelsea and eventually formed their own nonprofit. They now work with Washtenaw County to support the construction and development of the B2B Trail through fundraising and community engagement efforts. Faulkner says that public-private partnership has considerably sped up construction of the B2B Trail near Chelsea.

“The county was building a mile of trail a year,” she says. “Given the partnership and support from the community last year, five miles of the Border-to-Border Trail was built, and we built a tunnel under M-52 near the DTE Energy Foundation Trail to allow for safe passage under a highway. That would not have been possible without the private sector money.”

For more information about developments along the trail visit b2btrail.org.