August 19, 2021 (Investorideas.com Newswire) Joining us is Shawn Khunkhun, CEO of StrikePoint Gold. We discuss the value proposition of the Willoughby gold project and Porter silver project, both located in British Columbia’s prolific Golden Triangle. This is the most comprehensive interview to date on StrikePoint Gold, which is currently undertaking an exploration program on some very compelling projects. Find out why Eric Sprott, Crescat Capital, and Sprott Global are shareholders in StrikePoint Gold.

Shawn Khunkhun: StrikePoint is an exploration company advancing high-grade properties in safe jurisdictions. I repurposed the company back in 2016; the gold price had been cutting out and majors were not exploring, nor developing. And the thinking was we could buy projects for pennies on the dollar. We could advance them. And in the future, we could move those projects along to the majors that are looking to secure development pipelines.

Maurice Jackson: You have a reputation for having astute business acumen and great use of optionality on how you establish the company. Looking at the map, StrikePoint Gold has its property bank situated in the prolific Golden Triangle. Get us acquainted with the region and some of your neighbors. 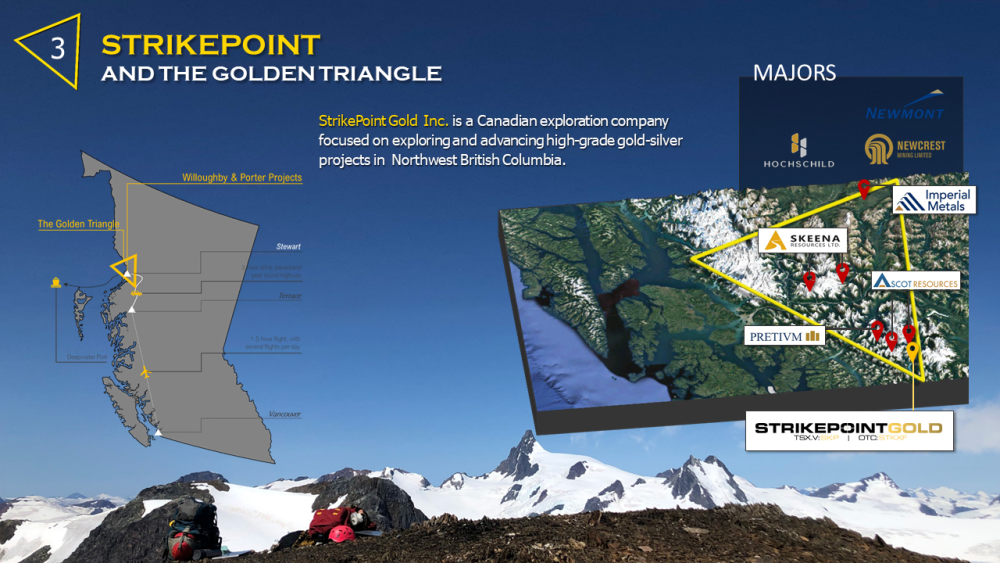 Eskay Creek is a strong gold and silver mine. The Golden Triangle is known for large deposits, high-grade deposits, and is one of the hottest mineral exploration hubs on the planet. It’s a flurry of activity with the discovery of Pretivm’s Brucejack, and we’re seeing large companies like Newmont and Newcrest come into the area. Noteworthy of mention, there is also tremendous infrastructure throughout the Triangle.

Maurice Jackson: Let’s go onsite and find out more. Sir, take us to the flagship Willoughby project and introduce us to the value proposition before us. 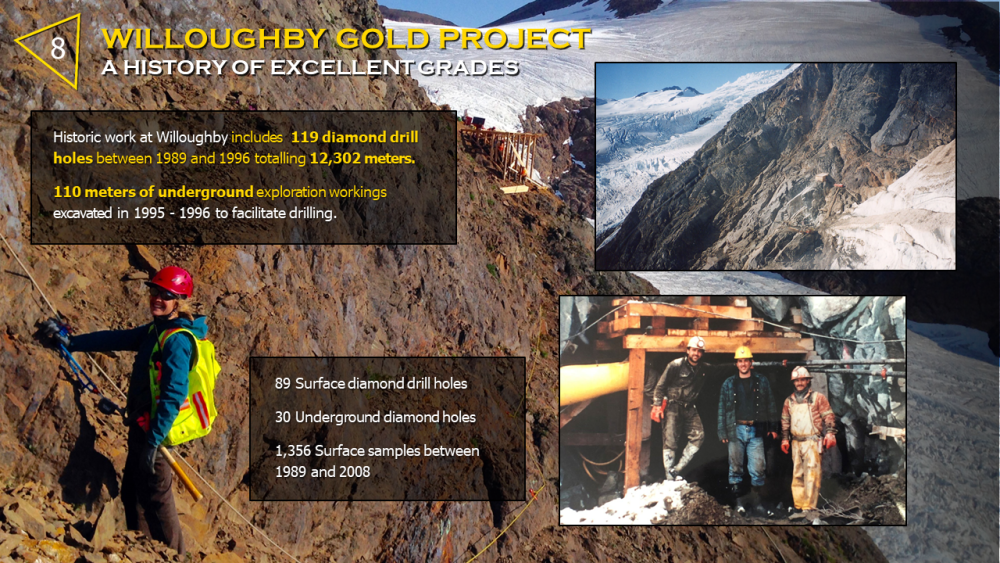 Shawn Khunkhun: The Willoughby project is a spectacular world-class discovery that was originally explored in the 1989 to 1996 time period. There were about 120 drill holes, and there were some robust grades of 20-gram gold over 20 meters thickness that were discovered. During that time the Bre-X scandal happened and you also had the gold price heading down to just under $200 an ounce in 1999. So it was a very, very difficult time for the mineral resource industry.

We acquired the property in 2018. There’s a lot of grade on the project and we are excited about the opportunity before us. We are trying to connect the dots in between zones. So, that’s the value proposition, linking these zones to show that this is a mineable project.

Maurice Jackson: I referenced business acumen, when and under what terms was StrikePoint Gold able to acquire the Willoughby gold project? 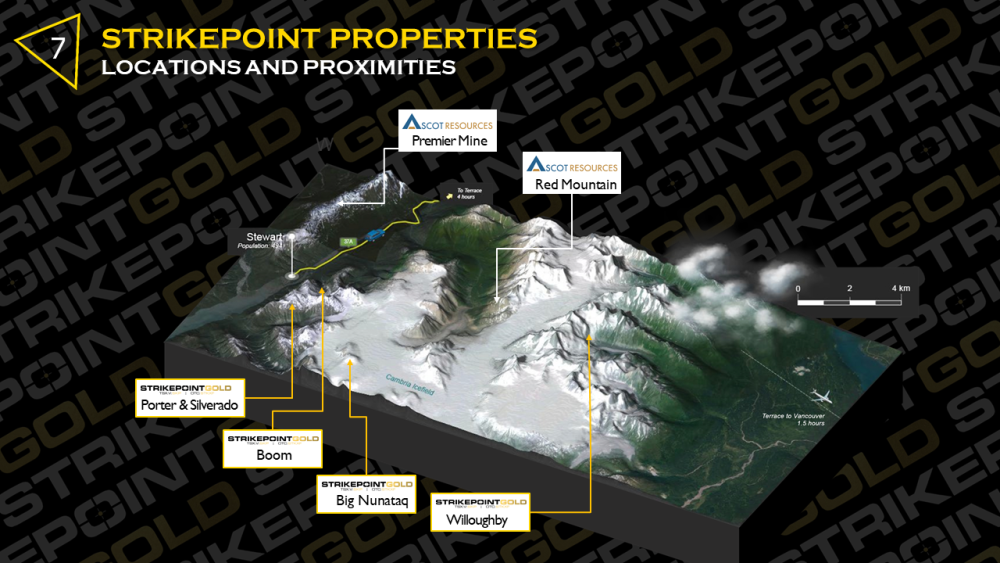 Shawn Khunkhun: That’s an interesting story. So back in October of 2018, the gold price got sold down to about $1,100 an ounce. And at that moment, we were able to acquire Willoughby for $85,000 in cash and by issuing three million shares of StrikePoint, which at that time was valued at about half a million dollars. Considering the amount of drilling that was done on the property, its proximity to Red Mountain, which was subsequently acquired by Ascot, it was a once-in-a-generation acquisition for the company.

Maurice Jackson: Germane to the value proposition and exploration thesis is an important stratigraphic marker known as the Red Line. What is the Red Line and where is it in relation to the Willoughby gold project? 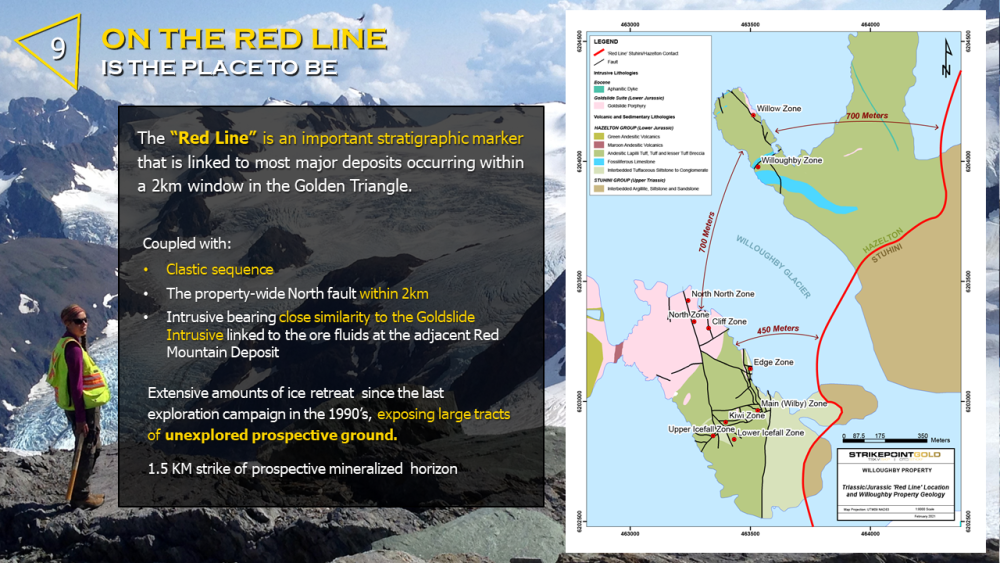 Shawn Khunkhun: There are two British Columbia Geological Survey geologists, Jeff Kyba and JoAnne Nelson, who were looking at this tremendous area that’s produced very high-grade deposits. They were trying to look at a geological model to identify where to look for the next giant gold, silver, and copper deposits in the region. So Kyba and Nelson came up with this theory, and it’s a theory that has been widely accepted by the scientific community and identifies a contact.

The big deposits in the Golden Triangle are found within two kilometers of where two different rock types meet. So this is the Triassic to the rocks and the Jurassic Hazelton formation. These are two different rock types that meet within two kilometers of that contact, which have produced some of the biggest deposits in the region.

Maurice Jackson: Thus far, we’ve been able to determine that StrikePoint Gold is in a friendly mining jurisdiction, located in the prolific Golden Triangle, neighboring some very prominent names, and the project is along the Red Line. Two prong question, can you delve a little further into historic resource and share some of the grades with us? 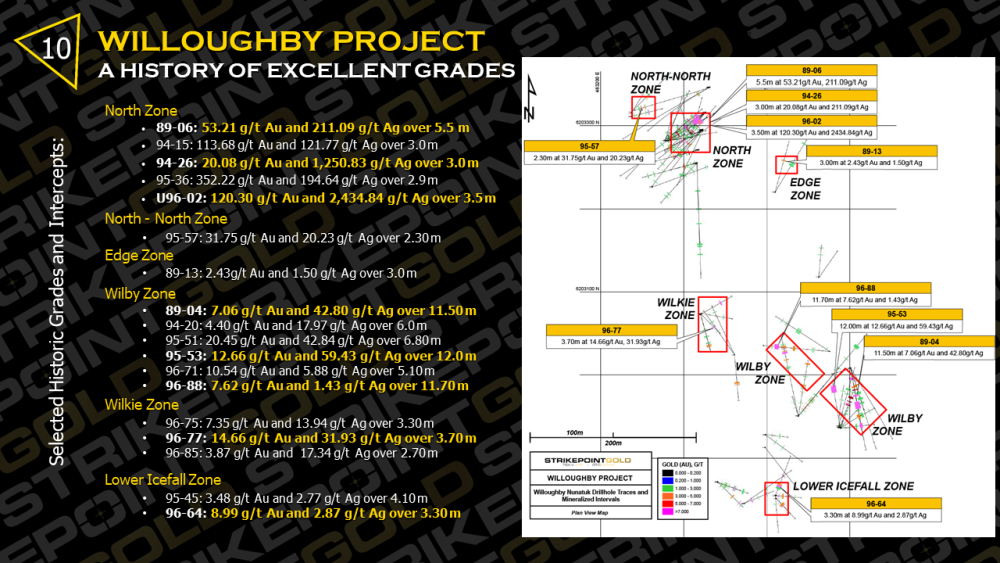 Shawn Khunkhun: Willoughby does not have a formal NI 43-101-compliant resource on the property, however, the historic resource has about eight different areas throughout the Willoughby property where there’s tremendous grade and there’s been a lot of drilling. So, on the back of a napkin, I don’t want to speculate in terms of ounces, but what we’re looking for here is the neighboring Red Mountain deposit, which is just under a million ounces at about 7.5 grams per tonne.

We think this is analogous to Red Mountain. And if you look at the footprints of the mineralization from surface, it leads us to believe that we’re onto a very, very large gold system here. So, this season is going to be crucial. We’ve done some significant work on the property to date. 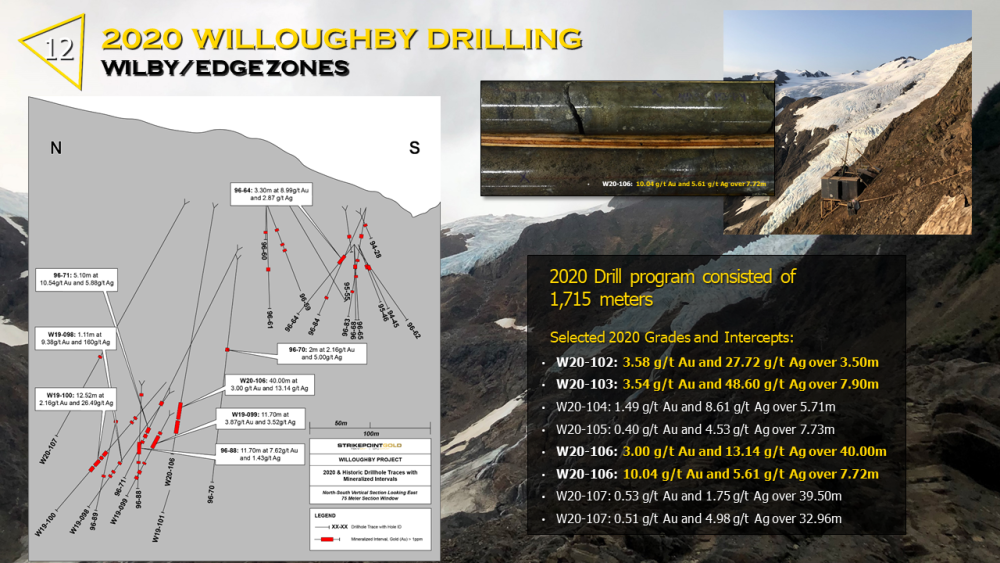 We’ve got assays pending and we’re trying to accomplish two things. Number one, link different zones of mineralization. Number two, we’re looking for where we could fit a deposit into the system. And we are drilling what I would describe as Wildcat holes into areas that should host a very, very large system. There are two opportunities on the property. One is for a KSM-style disseminated large system. These are two systems, one’s 40 million ounces of gold, and the other is 10 million ounces of gold.

And then the other opportunity is for a higher-grade epithermal vein-rich system. We have seen both types of mineralization on the property. And if you look at what Ascot is doing in terms of their hub-and-spoke model, along Ascot you also have Yamana and Newmont. So there’s a huge appetite from larger gold entities for consolidation and acquisition.

Maurice Jackson: Speaking of Wildcat drilling, last month StrikePoint Gold announced the commencement of a 3,000-meter drill program. How’s the program coming along and when can shareholders expect results?

Shawn Khunkhun: The program’s going well. I was just up in Stewart, along with our technical advisor Rob McLeod. StrikePoint Gold is blessed with one of the best teams in the exploration business. These are professionals that have worked on a lot of the big projects in the Golden Triangle. We originally came out with a 3,000-meter program at Willoughby, and we’re halfway through that program. It’s going exceptionally well. It’s on time, it’s on budget.

It’s very difficult to speculate on assays because you are dealing with third-party labs. And if 2020 taught me anything, we were exceptionally delayed in assay times, but I would suspect that we’re going to have a very results-rich autumn season, a very result-rich fall after Labor Day and that we should be reporting ongoing into Q1.

Maurice Jackson: Sounds very intriguing. If you enjoyed the value proposition of Willoughby, wait till you read about Porter. Mr. Khunkhun, please introduce us to the Porter silver project.

Shawn Khunkhun: But before we get specifically into Porter, I want to share with readers this goes beyond Porter. This goes more to why silver, and my last experience in a bull market for gold. When gold prices went from hundreds of dollars up to thousands of dollars into 2011, it was the silver…