Earlier this month, the Securities and Exchange Commission (SEC) shared its regulatory agenda for the next couple of years. The list is quite long and includes many areas of the securities industry. At the top of the list, was the exempt offering ecosystem with the Commission specifically mentioning Regulation D and the definition of an accredited investor.

Reg D, (506b and 506c) is the most popular exemption for securities and an enormous $1 trillion-plus market. Most all promising early-stage ventures utilize the exemption to raise capital from both individuals and venture firms. Reg D is a key driver for innovation as younger firms typically do not generate sufficient revenue to self-finance and thus must raise money from investors willing to shoulder the risk.

The United States is the most innovative country in the world. The combination of an environment that supports entrepreneurs and embracing risk, along with access to capital has helped to foster the most vibrant and robust tech innovation sector anywhere. If you think about it, few big tech firms, like Amazon, Apple, Google, etc., would have emerged without this entrepreneurial ecosystem. For policymakers, it is vitally important to safeguard this innovation ecosystem and, if anything, look to do more to fuel the engines of creativity that create both jobs and wealth.

While the Commission has not clarified what it would like to change regarding Reg D, and the definition of an accredited investor, observers are concerned that the SEC could send things in the wrong direction. 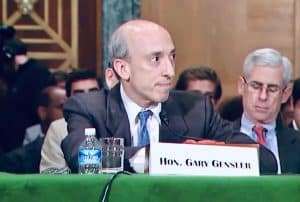 “… we at the SEC have recently published a new regulatory agenda. It covers a lot of ground: investment fund rules, insider trading, shareholder democracy, special purpose acquisition companies, and much more. Today, I won’t cover the nearly 50 items on the agenda. Instead, I’m going to focus on three broad areas: public company disclosure, market structure, and transparency initiatives.”

Gensler emphasized that their core principles remain: “protecting investors, facilitating capital formation for individuals and companies, and maintaining fair, orderly, and efficient markets between them.” Of course, how you apply these principles is of great import.

Recently, Burton published a list of items that should be pursued by policymakers to help small businesses and boost entrepreneurship. He stated:

“The vast majority of economic gains from innovation and entrepreneurship accrue to the public at large rather than entrepreneurs. Entrepreneurs are central to the dynamism, creativity, and flexibility that enables market economies to consistently grow, adapt successfully to changing circumstances, and create sustained prosperity. Entrepreneurship promotes the common good, prosperity, and a higher standard of living. Among the most important factors impeding entrepreneurship are securities laws that restrict entrepreneurs’ access to the capital needed to launch or grow their businesses. After all, without capital to launch a business, other impediments to entrepreneurial success are moot.”

We asked Burton for his opinion on the importance of Reg D for the innovation economy:

“Regulation D is central to the American economy. It is the source of initial funding for most of our successful, dynamic entrepreneurial ventures.  Regulation D is the most important means of raising private capital amounting to approximately $1.7 trillion annually and private offerings account for nearly twice as much capital as public offerings,” Burton stated. “The number of public companies is in steep decline and companies go public much later in their life cycle. This is primarily because of the ever-increasing regulatory burden imposed by the SEC on public companies and ever-increasing regulatory and litigation risks.”

Burton said it is a major concern that the SEC is apparently considering changes that would seek to impose heavy regulatory requirements on private offerings and drastically reduce access by investors to these offerings by investors who are not already wealthy.

“The first rule governing changes to Regulation D should be to do no harm. We should not kill the goose that lays the golden egg,” Burton said.

Burton added that the Commission is clearly considering “diversity,” climate change, and human capital disclosure mandates that are likely to do nothing to improve investor returns. They will, however, raise costs and litigation risk, accelerate the decline in the number of public companies and create an army of lawyers, accountants, and compliance officials who will live off of the new system and become lobbyists for the new complexity.

While the Reg D regulatory agenda item is opaque, there is no apparent pressing issue to make a change. The abstract states:

“The Division [of Corporate Finance] is considering recommending that the Commission seek public comment on ways to further update the Commission’s rules related to exempt offerings to more effectively promote investor protection, including updating the financial thresholds in the accredited investor definition, ensuring appropriate access to and enhancing the information available regarding Regulation D offerings, and amendments related to the integration framework for registered and exempt offerings.”

The definition of an accredited investor has long been criticized for excluding the vast majority of the country from participating in private securities offerings. The current rule is wealth-based when it should be based on sophistication – a far better metric. The past Commission sought to make the definition more inclusive but more needs to be done. Yet, some believe the definition should be more restrictive thus reducing access further.

The subject of exempt offerings could include other regulations that facilitate online capital formation like Reg A+ and Reg CF. Again, the last Commission improved these exemptions in a long consultation process that considered much industry feedback. A “further update,” while not necessarily indicative of more restrictions, is odd that the Commission would place exempt offerings at the top of their agenda.

It has been highlighted that the missing item on the agenda is greater regulatory clarity regarding digital assets and the treatment of tokens that may be securities, may be utilities, or perhaps both. It is possible that not including digital assets on the agenda was a simple error of omission or maybe the Commission is cooking up something with Congress. Clearly, digital assets are in need of greater regulatory attention. Commissioners Hester Peirce and Elad Roisman discussed this omission in a pointed public statement. We should know more in the coming months.