The road to Psychonauts 2 has been long and full of hurdles. The first game is in many ways the definition of a cult classic, having been received with nearly universal praise but played by way fewer people than it should have been, and though it certainly found more and more success as time went on, fifteen years ago, it wasn’t deemed a huge commercial hit. That, of course, meant that a sequel became very hard for Double Fine Productions and Tim Schafer to get greenlit. Until they started a crowdfunding campaign for it back in 2016, there were basically no assurances that there even would be a Psychonauts 2.

Now, after five years of development, crowdfunding, an acquisition by Microsoft, and further subsequent funding by Double Fine’s new owners, Psychonauts 2 is ready and here- and it’s worth the wait. Rather than being daunted by the long gap between the two entries, Double Fine have shown their confidence in the core strengths of the first game, honed in on them, and made a sequel that’s bigger and better in almost every way possible.

Psychonauts 2 kicks off directly after the events of the first game and the VR interlude, Psychonauts in the Rhombus of Ruin, with Raz and co having successfully rescued Truman Zanotto, the Grand Head of Psychonauts, and delving deep into the mind of deranged former dentist Dr. Loboto to try and unravel the mystery behind who hired him to kidnap Zanotto in the first place. What they uncover is a web of even greater mysteries and the hints of a far greater threat facing their organization than they could have expected, setting the stage for the rest of the game. Meanwhile, upon arrival at the Psychonauts HQ, known as the Motherlobe, Raz discovers that his dream of becoming a Psychonaut hasn’t quite been fulfilled yet- in spite of his past heroics, he’s only been recruited as an intern alongside a group of other kids, which means that right now, he’s on the lowest rungs of the organization’s ladder.

“After five years of development, crowdfunding, an acquisition by Microsoft, and further subsequent funding by Double Fine’s new owners, Psychonauts 2 is ready and here- and it’s worth the wait.”

Psychonauts 2’s story works on several levels. Raz continues to be a delightful protagonist, and everything from his wide-eyed reverence of the Psychonauts, to his subdued frustration at not being able to do more, to his struggles with finding friendships with his fellow interns, to, of course, grappling with the complicated past of his own family, lends him a great deal of depth, instantly making him a relatable character. And he isn’t the only character that shines. Psychonauts 2’s cast is large and varied, and full of eccentric personalities. Each character feels perfectly defined and wonderfully unique in their quirks and traits. Charming and boisterous, creepy and slightly unhinged, broken and despairing- the sheer range of personalities exhibited in the game’s cast is hard not to be impressed with, and the fact that it manages to portray each of them with equal confidence is testament to the quality of its writing and storytelling.

Of course, like its predecessor, where Psychonauts 2’s story really stands out (even more so than the first game, in fact) is in the weighty themes and topics it deals with, and in how it deals with them. Raz has run-ins with a lot of people throughout his journey, each dealing with their own personal demons and traumas, and the topics that the game deals with tend to be pretty heavy, from shattered personalities and crippling anxiety to post-traumatic stress, overbearing guilt, and depression. On paper, pairing these themes with the light-hearted, bold, and humourous tone of Psychonauts might seem like a bad idea- but it works. It’s that inherent contradiction exactly that makes it work, in fact, because Psychonauts 2 consistently strikes that tricky, elusive balance between humour and sensitivity.

It’s funny, yes, often darkly so, but it’s never insensitive. It presents heavy themes in a light-hearted manner, yes, but it never makes light of them. And once you’re done traipsing through the psyche of a damaged person and tried putting them back together, while you do remember all the zany and colourful sights and sounds of the level and its smart writing and interactions, you also tend to reflect back on what happened, and get an excellent understanding of the many, many facets of that person and their past. Topics like these are never easy to deal with in any story in any medium, but Psychonauts 2 does it time and time again. The fact that it keeps doing it so effectively and yet always manages to maintain its charming, humourous tone deserves a lot of praise. It tells a story that deals with serious, often twisted themes, yet delivers a positive and hopeful message, and wraps it all up in a happy, colourful veneer. That’s no small achievement.

“Psychonauts 2 tells a story that deals with serious, often twisted themes, yet delivers a positive and hopeful message, and wraps it all up in a happy, colourful veneer. That’s no small achievement.”

And yes, all of these wildly different psyches also serve as the foundation on which Psychonauts 2 builds a solid array of dazzling levels that are brimming with creativity. Raz jumps into the minds of quite a few people throughout his newest adventure, and the problems that each of them are facing are used as setups for unbridled, unhinged, creative ingenuity on the game’s part, both in terms of visuals and design. A level that is part hospital and part casino, a level that is set in a city on the brink of destruction that’s also somehow a massive bowling alley, a level that’s the stage for a bizarre cooking show, and so, so much more- Psychonauts 2 keeps hitting you with diverse environments that use their narrative foundations to contextualize their game design choices. It’s a wonderful harmony of story, visuals, and design, delivered over and over again throughout the experience. Unlike most other games you will ever play, Psychonauts 2 constantly laughs in the face of ludonarrative dissonance.

Outside of the main levels, the game also gives you plenty of room to tackle optional content. The Psychonauts HQ and the area surrounding it serve as the game’s hub location, much like Whispering Rock did in its predecessor, and it’s an absolute joy to explore. There’s a bevy of collectibles to hunt down, characters to meet and have conversations with so you can learn more about them and their quirks, and side quests to tackle for great rewards. The progression system also encourages you to keep exploring in order to level up your intern rank and unlock new upgrades. Meanwhile, the quality of some of the optional, completely missable content is genuinely on par with the critical path at times, which means there’s more than enough stuff here to not only keep you busy for a while, but also to keep you wholly satisfied. Psychonauts 2 might not be
the largest game, but it’s densely packed full of meaningful content.

Of course, as much as Psychonauts 2 emphasizes story and storytelling, it also puts a great deal of emphasis on actual platforming. It’s a platformer, after all. Level design is tight and varied, and the platforming challenges presented are generally a lot of fun, whether you’re grinding on rails or chaining jumps across massive chasms or trying to reach unreachable places with flourishes and pirouettes. Movement can at times be a bit floaty and unresponsive, which leads to some frustrating moments of failure, but by and large, in both level design and platforming mechanics, Psychonauts 2 is solid. 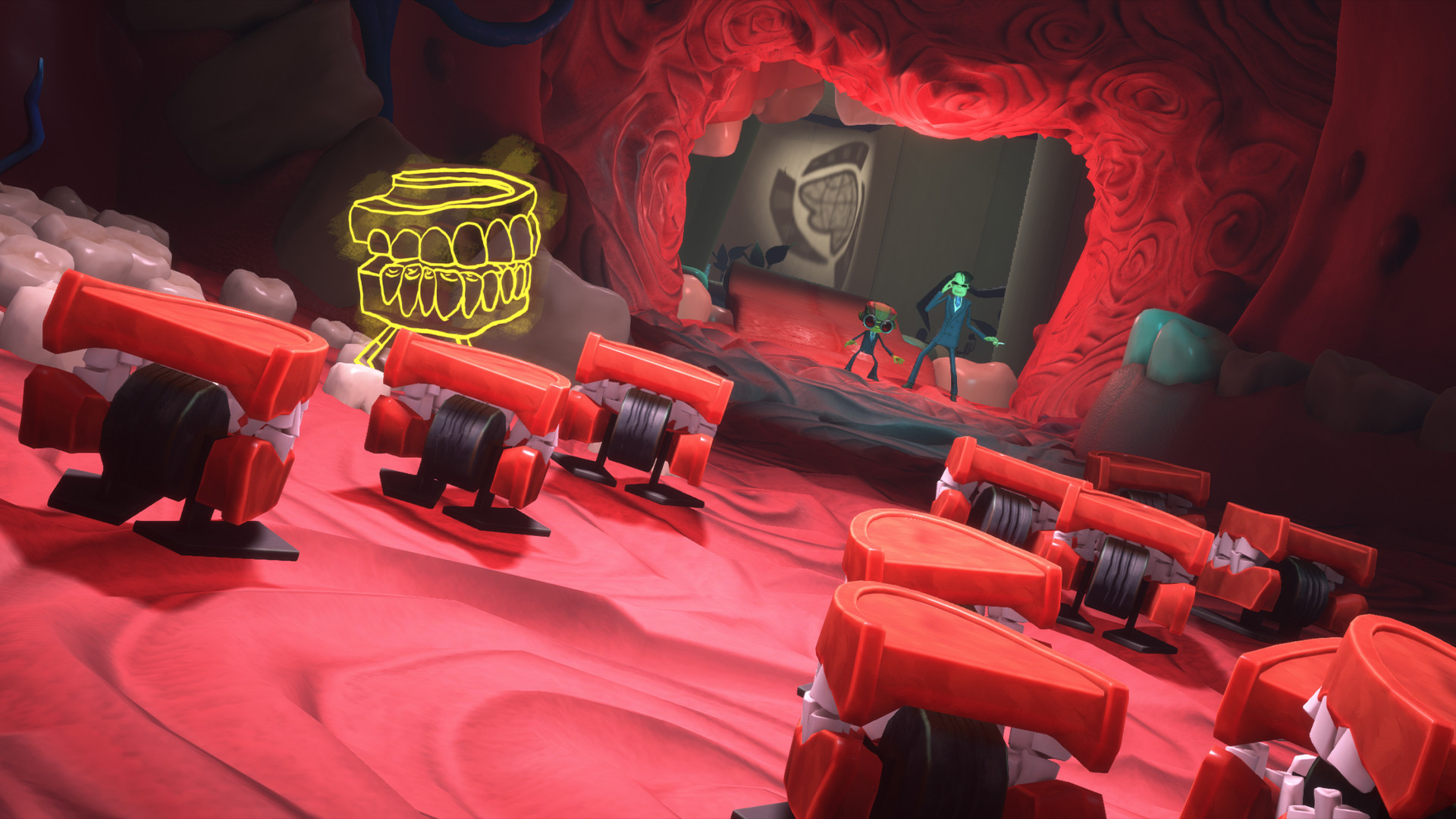 “Psychonauts 2 exudes a level of confidence that you’d expect not from a sequel to a really old cult classic, but from a blockbuster game coming from a developer that has all utter confidence in its vision and capabilities.”

Combat is a bit more hit-and-miss. The game’s made a lot of improvements over its predecessor in this area, from a much larger pool of enemy types, to quality-of-life changes that improve how and when you can use your abilities, to just a much greater general focus on combining all of your abilities and melee attacks to take out different kinds of foes with different kinds of weaknesses. The first game, however, didn’t exactly set a very high bar where combat was…