By The Investor team

The South Korean financial and investment market has been going through probably the biggest and fastest change in its modern history under the COVID-19 pandemic, which still shows no sign of abating.

It may not be the case just for Asia’s fourth-largest economy, as global markets as a whole have also been greatly touched by the spread of the virus and a series of expansionary fiscal measures, as well as the lockdowns that followed. What appears to have made the Korean market unique in terms of the virus-triggered industrial shift is in its speed of the change itself, and the magnitude of market participants embracing such unprecedented transformation thanks to the world’s most-wired country’s intensive information technology infrastructure, and perhaps, the infamous “hurry, hurry” culture.

Here’s a look at the biggest winners and losers, analyzed by the Investor team of The Korea Herald and a preview of what the prolonged pandemic might bring.

South Korea had been considered a late starter in the development of financial technology firms compared to other players in advanced markets, but the pandemic has allowed fintech companies to catch up with their international rivals. Why? Various industries are increasingly relying on online payments as consumers shop online more than ever before.

Daily transactions using easy payments rose an average of 449.2 billion won ($384.6 million), 41.6 percent up from the previous year. Electronic financial business operators such as Kakao Pay and Naver Financial accounted for 45.7 percent of the total transactions.

In addition, even in the offline payment area, payment companies appear to be the winner, partly because of COVID-19 check-in mandates. Before that, South Korea was far behind China when it came to QR payments. Ryu Young-joon, CEO of Kakao Pay, said QR check-ins helped boost the adoption of QR payments in-person, enticing Korean customers more accustomed to using credit cards, and that would likely stay the norm even after the pandemic.

In Korea, fintech companies such as Kakao Pay and Toss that specialize in digitization saw better-than-expected growth. Kakao Pay is expected to go public later this month, while Viva Republica, the operator of fintech app Toss, reached a whopping 8.2 trillion won in corporate valuation for its latest funding round.

In terms of banks, who are competing with up-and-coming fintech companies, online-only banks shined. KakaoBank went public earlier this month, while K bank had a turnaround in the second quarter. This draws a stark contrast to the growing number of closures of physical bank branches across the country. Granted, the decreasing number of bank branches started quite a while ago, but the pandemic has sped up that trend. 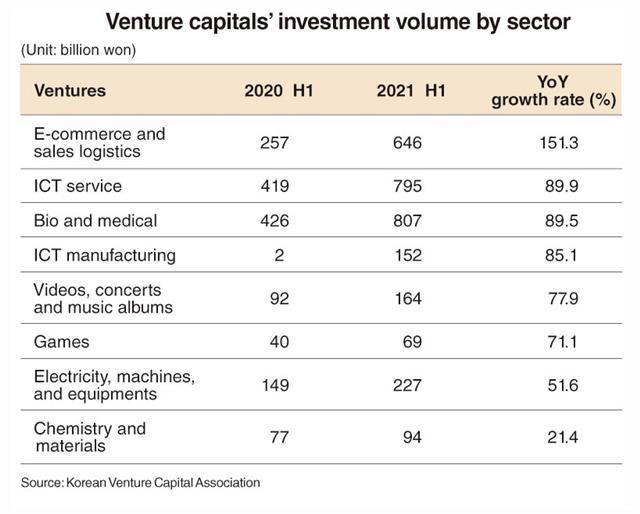 One might think extended social distancing and remote work would hinder investment activities such as due diligence and meetings between founders and venture capitalists. Yet despite these obvious hindrances, data shows that the venture capital industry in Korea has been unstoppable, even as the pandemic rages on. In the first half of this year, venture capital firms grew 128.3 percent from a year ago to a record-high 404 billion won. The figure surpassed last year’s total of 227 billion won when the first wave of the pandemic struck the local industry.

In this overall upbeat market sentiment, those companies providing products and services that facilitate contactless lifestyles spurred by the COVID-19 pandemic outbreak are seeing a growing influx of investments from venture capital.

Startups in the bio and medical sector, e-commerce platforms and logistics and the information and communication technology services sector were their favorite destinations, according to data from the Korean Venture Capital Association.

Investments in e-commerce and logistics firms surged by 151.3 percent to 646 billion won in the first half of this year, largely due to the spike in online shopping.

ICT services companies in 5G, artificial intelligence, big data and software development saw the second-steepest hike of an 89.9 percent increase in capital flow. Alongside growing interest in COVID-19 vaccines or biosimilars of pharmaceutical giants, bio and medical ventures saw 807 billion won of fresh investments coming in the first half.

When the country’s main bourse and secondary index both hit their lowest points in nearly 11 years in March last year, with the Kospi closing at 1,457.64 points and Kosdaq closing at 428.35 points as the pandemic crashed the market, no one would have predicted the monthslong upward movement.

But backed by the “Donghak Ant Movement,” which refers to a stock buying spree driven by retail investors, the country’s benchmark Kospi soared above 3,300 points, while the tech-heavy Kosdaq traded above the 1,000-point level in the first half of this year, more than 20 years after the dot-com bubble burst.

As of Friday’s close, the Kospi and Kosdaq had jumped 122.5 percent and 143 percent from their recent bottoms, respectively. 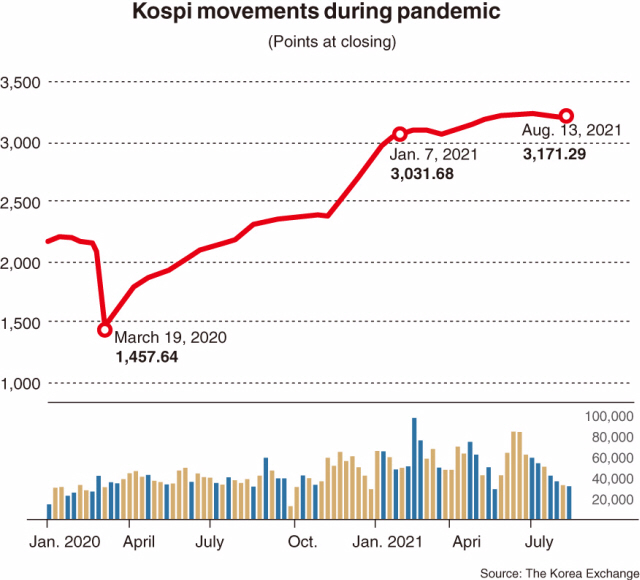 Companies eyeing initial public offerings were quick to take advantage of the bullish market, moving up their public listing plans. So far this year, 46 firms, barring real estate investment trusts and special purpose acquisition companies, made their debuts, according to Korea Exchange data.

Their combined market capitalization stood at 114.7 trillion won as of Tuesday, surpassing 100 trillion won for the first time on a yearly basis. That accounted for nearly 4.4 percent of the accumulated market valuation of listed firms in both markets of nearly 2,800 trillion won here.

The boom in the market also created another winner: brokerage firms. Local brokerages have been posting record gains since last year. The combined net profit of 57 brokerages came to 2.98 trillion won in the first quarter, compared to a profit of 1.58 trillion won a quarter ago, thanks to the market rally that helped them earn higher commission fees.

Though the stock market has grown in size, not all sectors have benefited from the unprecedented pandemic. Although market bellwether Samsung Electronics and No. 2 SK hynix maintained their top positions in terms of market valuation, the rest of the top 10 Kospi stocks, excluding preferred stock, shuffled in the rankings.

Fueled by the contactless boom across the country, internet giants Naver and Kakao saw their market cap rankings climb, besting previous second and third runners-up LG Chem and Samsung Biologics. Stocks in secondary batteries, biopharmaceuticals, online gaming and IT have gained much attention from investors, experiencing a surge in their stocks. On the contrary, stocks listed in traditional sectors such as oil refining, shipbuilding and steel were turned away.

If you call something a winner because of an upward movement in price, then the housing market is a champion. Despite the government’s warning signals, nationwide housing prices have been gaining for 23 months.

The unstoppable apartment price increases in Seoul have driven the highest growth of 0.2 percent on-week as of Aug. 2, according to data released by Korea Real Estate Board. Apartments in Gyeonggi Province, surrounding Seoul, also rose 0.47 percent on-week. It was the biggest rise since the state-run company began providing statistical data in May 2012. Meanwhile, apartment prices nationwide showed an increase of 0.28 percent, a six-month high, during the same period.

Followed by high demand for home-backed lending and an investment frenzy, people’s credit-based loans and bank debt in the country jumped rapidly. According to the Bank of Korea, outstanding bank loans to Korean households marked 1,040.2 trillion won as of end-July, up 9.7 trillion won from a month prior.

It was the largest…

Read More:Meet market winners and losers in times of pandemic