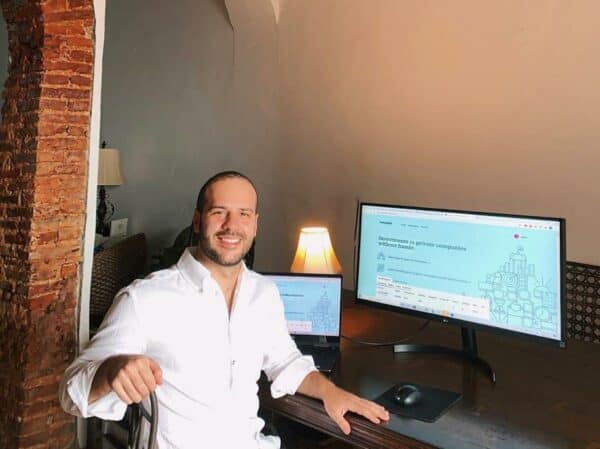 Netcapital Inc. (OTC: NCPL), is a publicly-traded Fintech that provides online capital formation largely by utilizing the Reg CF securities exemption with its FINRA regulated funding portal Netcapital.com. In an interesting move, Netcapital Inc. listed its shares on the OTC Markets (OTCQX) earlier this year. As of today, the company has a market capitalization of over $28 million (Netcapital notes that it trades at a significant valuation discount to its peers).

In its most recent financial report, Netcapital Inc. said that fiscal nine-month revenues came in at $3,770,813, an increase of 137% over the previous year.

Netcapital also offers secondary trading of crowdfunded securities via a partnership with Rialto Markets, a registered broker-dealer operating an alternative trading system (ATS) as well as an advisory services firm.

Founded by CEO Jason Frishman, Netcapital received early support from DraftKings founder and CEO Jason Robins who invested in the company and continues to act as an advisor, according to their website. The advisory board includes a long list of prominent names including former PayPal CEO Bill Harris and David Brown of Techstars – among others.

While the funding portal sector has become more crowded in recent years, Netcapital has established itself as a solid contender for deals in a growing market.

In March of 2021, the Securities and Exchange Commission (SEC) increased the funding cap of Reg CF from the anemic $1.07 million to the far more workable amount of $5 million. This increase has encouraged more established firms to leverage the Reg CF securities exemption and bodes well for platforms that raise capital online who want to attract a more diverse set of firms in need of growth capital.

Late last week, Crowdfund Insider connected with Frishman for an update on his crowdfunding platform. We asked him how the increase in the Reg CF funding cap has impacted Netcapital in the last few months.

“With the increase to $5 million, issuers that otherwise would not have considered raising money online with a funding portal are now excited about the opportunity,” said Frishman. “Small startups and larger private companies have both expressed renewed and rejuvenated interest in the online private markets, and are actively exploring how to use the new rules to help their businesses.”

Frishman added that the limit increase also gives investors opportunities to invest in the most sought-after deals, as the $5 million limit allows for many more investors to get into the offering before selling out.

“We know this is just one further step in the right direction, and we are optimistic about the attention it has brought to our space.”

We asked about deal flow and the type of issuers and securities they are listing. Frishman said that Netcapital issuers offer common stock.

“It’s easy to understand, and all our investors can feel confident they are buying a similar type of security. As far as type of issuers, we’re industry agnostic, as long as a company is innovating. We like to finance innovation,” Frishman stated. “It can take many forms, from a company laying the groundwork for hotels in space, to development of non-addictive opioid pain relief, to creating more efficient and cost effective methods to produce lithium for batteries, to developing payment plans to address the student loan crisis. We believe our role in this ecosystem is to empower companies to raise capital using these new rules, and enable investors to invest in these innovations.”

As many securities crowdfunding platforms also raise capital under Reg D (accredited investors only) we inquired as to whether, or not, Netcapital was doing the same. Frishman explained they are doing side by side Reg D 506c offerings, a feature that allows for larger funding rounds, with their partner Livingston Securities.

We inquired about the SEC’s recent announcement to review the exempt offering ecosystem and the definition of an accredited investor and Frishman expressed their intent to continue to focus on Reg CF without offering an opinion as to what the SEC’s move may mean.

Netcapital is one of a few crowdfunding platforms that have readily tradeable shares and we asked as to why he decided to list their shares on OTC Markets. Frishman said that Netcapital is all about democratizing access to investment opportunities.

“We felt making shares in our company available to retail investors is an important part of our mission. We wanted to make sure that those who share passionately in our mission were able to share in our success.”

Regarding their partnership with Rialto and its ATS marketplace, Frishman said this was part of a far-reaching strategy:

“Our long term goal is to help investors achieve liquidity in the investments they’ve made for which there is demand. We’re very excited about our partnership with Rialto. They have tremendous experience in capital markets. We believe when we relaunch our Secondary Transfer Feature with Rialto it will be a big win for investors in the space.”

So will Netcapital add any other features or services in the new future? Frishman did not share any insight on forthcoming changes or updates expressing his intent to focus on customer service: