Crowdfunding platforms say due diligence is being carried out by dedicated teams on all campaigns but a few instances prove otherwise.

A fundraiser on a popular fundraising platform called for donations to support a woman trying to save her 3-year-old baby battling cancer. The campaign said that the little boy was suffering from acute Lymphoblastic Leukaemia. The post mentioned that the baby was diagnosed with blood cancer in April and that the mother was a teacher who did not have the money to afford the expensive treatment. The campaign also mentioned that Rs 30 lakh was the estimate for the treatment. The campaign also had multiple photos of a baby boy in a hospital bed and one in which the baby was seen wailing.

Sai Charan Chikkulla, a volunteer based out of Hyderabad has been actively working since the pandemic, trying to help patients with oxygen and beds in hospitals. On July 9, Charan received the link to this particular campaign and was asked to help verify if it was genuine. Following which he tried to reach out to the creator of the campaign via Twitter, but to his surprise found that he was soon blocked. Another person on Twitter mentioned that an account (@rakhisingh81) was blocking all those who posed questions to her about this particular campaign. When TNM looked up the handle on Twitter, the account had its tweets protected and the account’s timeline was restricted. Another account (RiyaSingh_1993) which was also promoting the campaign enthusiastically, also restricted its tweets when people began calling them out.

Charan wrote to the fundraising platform to alert them of the possible discrepancies. In his mail, a copy of which TNM has, Charan mentioned four reasons why the campaign is likely to be fraudulent. The reasons included absence of hospital and billing information. He also mentioned that the handle promoting the campaign on Twitter was blocking all those reaching out with queries. Another observation mentioned was that the target of the campaign was initially set for Rs 10 lakh, but was later increased to Rs 30 lakh. Charan’s mail however, did not evoke any response. A reminder was sent to the fundraising platform on July 11, but he still didn’t get a response. Interestingly, the campaign was soon stopped by the platform and a message on the campaign page read, “This campaign has stopped and can no longer accept donations.” The campaign had already managed to raise Rs 27.74 lakh out of the Rs 30 lakh target that was set. 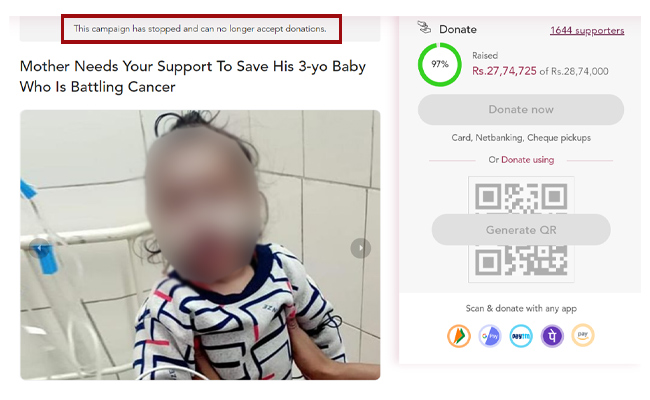 A screenshot of the campaign

When TNM asked Milaap about this particular fundraiser, the platform said that the fundraiser was reported by a few users on their page. “Our trust and verifications team re-investigated this, including a physical visit to the hospital. We found the facts mentioned pertaining to the treatment and hospitalization as misleading. We immediately paused the fundraiser and have sought explanation from the family. The family contested our decision with alternate information, and hence we formally sought an explanation via our legal channels, as is our process to ensure authenticity. In case of no response to our legal notice within stipulated time, donors will be informed about the events that transpired through an update and donations will be refunded. We will also report the fundraiser to law enforcement and pursue legal remedies available to serve as a deterrent.”

Deepika Narayan Bhardwaj, an independent journalist and documentary filmmaker had recently taken to Twitter to call out a person who had started fundraising campaigns. She got to know about this fundraiser through someone who sent her the link. Deepika, like Sai Charan, often helps amplify campaigns and also reaches out to people who start these fundraisers for more details. Speaking to TNM, Deepika said, “Someone had sent me the link to this fundraiser. I got in touch with this man from Hyderabad and that is when he told me he had lost his job and that he was struggling to feed his young daughter. I asked him for supporting documents and he said he would share them with me.”

Despite waiting for several hours, Deepika never got the documents. “I realised this was a red flag. I soon realised there was another campaign too on Milaap that was started by the same person. Twice when I tried to reach out to him, he did not answer the call. From experience I knew these were red flags. Also, one of the two campaigns started by him had already raised around Rs 40,000 by then.,” added Deepika.

“The fact that the campaigns did not have supporting documents and that the man’s daughter’s age was mentioned differently in different places, made me more suspicious. I immediately reached out to Milaap and alerted them. The platform tried to verify the details and as they failed to do so, they mailed me saying that the campaign was closed and that the donors were all refunded their money,” explained Deepika.

In response to Deepika’s mail, Milaap’s representative responded saying, “Given the evidence in place as well as the organizer being non responsive despite multiple follow ups to seek clarification, we have deemed this fundraiser as misleading with an intention to defraud the platform and donors. Therefore, as the campaign is found to be fraudulent, we have refunded the donations made with immediate effect as per protocol.”

TNM tried to reach out to the man who had started the campaign on Milaap to find out why he had abandoned the campaign and become unresponsive during the course of the campaign. Speaking to TNM, the man said, “I had started two campaigns on Milaap. One for myself as I was in a financial crisis, and another campaign to raise money for my friend Raju. He was in need of money, and as I too didn’t have enough, I started a campaign for him. While the campaign was going on, we mortgaged some gold that Raju and I had and we raised the needed money. Hence, I just left the Milaap campaign without closing it.”

When asked if he later managed to find a job, he said he found a job in an automobile showroom in Hyderabad and that’s where he is presently working. He also said this was the first time he had started a campaign to raise funds. “Whatever details were asked by Milaap, I provided them the same. I got around Rs 40,000 from them,” he added.

Charan and many other such volunteers have noticed such red flags in several other campaigns. “It takes a lot of time and effort to verify these crowdfunding campaigns. I have identified nearly six fraudulent campaigns in the last few weeks. In some cases, we check with the concerned hospital and in some cases- we crosscheck with the patient or their relatives. We also came across cases wherein someone not even related to the patient was found raising money in their name. The patient wasn’t even aware of such a fundraiser that was underway.”

Deepika felt that the onus of checking the veracity of these campaigns should lie with the fundraising platforms. “It is impossible for people to individually check these campaigns. Platforms need to verify documents and only then put out campaigns,” said Deepika.

Over the years, several financing and fundraising platforms have become popular among those hoping to crowdfund. Crowdfunding campaigns to raise money for COVID-19 treatment, cancer, transplants, accidents, education, flood relief etc are the most commonly visible campaigns on these platforms.

TNM reached out to three popular platforms to find out if they had a mechanism in place to verify fraudulent campaigns. Here’s what we found:

Ketto hosts around 5000 campaigns on a monthly basis. While the platform offers a “zero platform fee”
option, it relies on voluntary contributions. The platform also has a service-based model wherein they assist campaigners with content, photographs, videos and promote it as ad campaigns. Customers are charged anything between 5% to 13% of the funds raised. According to Ketto, they reject approximately 23% of campaigns because the campaigners failed to provide additional proofs and documents.

Throwing light on the platform’s efforts to identify and eliminate fake campaigns, Varun Sheth CEO& Co-founder, Ketto.org said, “At Ketto, our endeavour is to provide a seamless experience to both campaigners and donors to help them raise funds for their projects. All the campaigners are required to go through a stringent verification process, a campaigner needs to submit…