BOULDER, Colo. (BRAIN) — Driven, a spinoff of CeramicSpeed that is developing a low-friction drivetrain for bikes, reached its $1 million goal for its equity crowdfunding campaign in just two days.

“We are getting so many inquiries from people who want to give us money we don’t know what to do,” Jason Smith, CeramicSpeed’s Chief Technology Officer, told BRAIN on Thursday.

The campaign values the company at $3.3 million. SeedInvest, which managed the campaign, also received an additional $600,000 in over-subscriptions that are now on a wait list in case any of the first pledges are disqualified for some reason.

The campaign had been planned to take four weeks. But it hit its goal before SeedInvest even did any marketing outside the bike community. The campaign was featured on several consumer cycling websites and BRAIN earlier this week and that was enough.

“I have to presume it’s all cyclists who are jumping in (as investors),” Smith said.

With funding secured, Smith said he is now looking for a new facility in Boulder as Driven moves to bring its drivetrain to market.

“We will need a new CNC machine and more 3D printers. We’ve just brought on board another engineer and now we are looking for an electronics engineer,” he said. 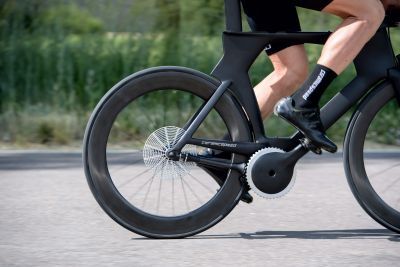 “Within 6 months we hope to have a fully functional prototype that can be run at full strength,” he said. “We haven’t reached the point where we can put full rider output into the system, but we have some ideas and we are putting in some patents on them,” he said.

“We don’t have any intention of making our own bikes beyond the first demo run,” he said. He said he’s already been in touch with several bike brands.

Smith said the company chose an equity crowdfunding campaign after finding that most venture capital investors were looking to invest in digital technology and were looking for a much larger potential upside than a bicycle drivetrain could promise.

“We can talk about maybe a three-time return in five years; they are looking for a 10-20-30 times return in three years. We are a lower risk investment but there’s a lower upside from a VC point of view.”

Smith said some friendly venture capitalists suggested the company try equity crowdfunding, a new kind of fundraising tool that only became legal in the U.S. in 2017. ECFs offer a way for small investors to help fund startups in exchange for a share of the company.

Unlike regular crowdfunding campaigns, ECFs are regulated by the Securities and Exchange Commission.

On March 29, Veer, a California-based company with a belt-drive drivetrain design, launched an ECF with plans to raise $1.07 million. So far it has raised nearly $700,000.

Given the quick success of Driven’s campaign and the over-subscriptions, Smith said the company is considering a second fundraising round.

In the meantime, he said he’s already getting used to some investor pressure.

“I already have to answer to investors, they are sending emails asking when we are going to get going on this,” he said.

Read More:Driven drivetrain quickly reaches fundraising goal — and then some