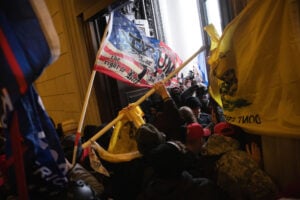 The circumstances surrounding Ashli Babbitt’s death are not in dispute. On January 6, the 35-year-old veteran, who had come to believe in various quack conspiracies about election fraud, was part of the crowd that stormed the Capitol in an attempt to prevent Joe Biden’s election victory being certified in accordance with the Constitution.

After one of the rioters broke a window to the House Chamber, Babbitt was shot by a U.S. Capitol Police officer as she attempted to climb through and gain access to the room where multiple members of Congress were still trying to evacuate.

And yet, the rightwing has waged a persistent campaign to paint this person as a harmless, unarmed patriot, senselessly gunned down by a trigger-happy cop. Here’s Babbitt’s husband Aaron Babbitt and his lawyer Terrell Roberts telling their tale of woe to a sympathetic Tucker Carlson in June:

“It sickens me to hear what people say about Ashli. There has never been a person that Ashli ran across in her daily life that didn’t love her.”

Ashli Babbit’s husband Aaron and lawyer Terrell Roberts speak out on their lawsuit to identify the officer who shot her on Jan 6. pic.twitter.com/Ic6vhi5K16

Witnesses say that the badly outnumbered officers were warning the crowd not to go further, a warning Ashli Babbitt disregarded. And it doesn’t accord with the reports from people who were inside the room when the shot was fired.

“It wasn’t his choice. He did not show up that day to have to do that, he got put in a situation where he had to do his job because there were members [of the House] still in the balcony.” Republican Rep. Markwayne Mullin told the Independent.

“If you’re going to present your weapon in a manner and give commands and they still don’t listen and they still approach, you don’t have a choice,” he said, adding later, “I don’t know for a fact, but I can guarantee you he’s never had to pull his weapon in a manner like that before. I know for a fact because after it happened, he came over. He was physically and emotionally distraught. I actually gave him a hug and I said, ‘Sir, you did what you had to do.’”

Nevertheless, Aaron Babbitt has filed a FOIA suit in the Superior Court of DC demanding to know the name of the officer who fired the shot. Capitol police are employed by congress, which is exempt from FOIA, so Mr. Babbitt has sued the District of Columbia, on the theory that the Metropolitan Police Department’s Internal Affairs Division investigated the shooting and cleared the officer, so they definitely know his name. The Justice Department subsequently reviewed MPD’s decision and concurred that there was no criminal or civil rights violation.

So far, so crazy. But wait, there’s more! Because Mr. Babbitt’s lawyers have promised to bring a civil action against the U.S. Capitol Police for “upwards of $10 million” on the theory that shooting her was somehow illegal.

“A rookie police officer would not have shot this woman,” Terrell Roberts told Zenger News. “If she committed any crime by going through the window and into the Speaker’s Lobby, it would have been trespassing. Some misdemeanor crime. All a rookie cop would have done is arrest her.”

Well, good luck getting through qualified immunity on the argument that a less experienced officer would have made a “better” decision. And good luck to the attorneys trying to get paid if and when they actually file this garbage lawsuit.

Luckily, they’ve come up with a private funding mechanism. Using the controversial “Christian” crowdfunding site GiveSendGo, the firm representing Mr. Babbitt is soliciting cash to investigate the “unjustified use of deadly force which violated her constitutional rights.”

The lawyers implore good American patriots to pony up so they can shake loose the name of the officer who fired the shot and bring him to “justice.”

My law firm and I represent Ashli’s husband and family members. We have filed a lawsuit against District of Columbia on behalf of Ashli’s husband, Aaron Babbitt to obtain investigative records including the name of the police officer that killed Ashli and surveillance video from inside the Capitol. Additionally, we have done extensive investigation in preparation for lawsuits that will be filed against U.S. Capitol Police and the police officer that took Ashli’s life.

The legal expenses in a case such as this stand to be significant. Your contribution will be used to offset expenses related to engaging professionals and other consultants with expertise in use of force, police procedure, security and computer forensic analysis, medical professionals, and other legal and technological specialties.

The case was filed in June, but the story is back in the news this week since Wingnutistan has convinced themselves that they’ve discovered the identity of the officer who fired on Babbitt. And, no, we’re not linking to it — these people came within seconds of carrying out their wish to “Hang Mike Pence,” and that guy has Secret Service protection.

Elizabeth Dye lives in Baltimore where she writes about law and politics.