Sacramento has seen its fair share of 100-degree weekends this summer, prompting cooling centers — air-conditioned indoor locations where people can keep cool, grab water and get snacks — to make their return.

But the city and county aren’t the only ones trying to quench thirst and keep Sacramentans cool this summer. A grassroots effort by local organizations and individual residents is keeping the misters on and coolers stocked with cold water for the days when official cooling centers are shuttered.

Alchemist Community Development Corporation (Alchemist CDC) is a Sacramento nonprofit that typically focuses on food access issues. When Sacramento contended with both smoke from wildfires and extreme heat last August, the organization started working with community members to help them set up temporary cooling centers, according to Joe Robustelli, the group’s neighborhood empowerment manager.

“It’s completely grassroots — it’s crowdfunding, where we put out a call, people make a donation, I keep track of the donation, and I go out and I purchase whatever was donated,” he said. “We’re too small to actually fund it ourselves. So it has to be funded by the community.”

When they were open in early July, the Hagginwood center saw 27 guests total, and Hart Senior Center saw 50, city spokesperson Tim Swanson said in an email.

Advocates for homeless residents say the cooling centers’ lack of accessibility is one issue causing the low numbers.

“The cooling stations from the county and the city are great, but they don’t help with some of the outlying neighborhoods,” he said. “There’s a lot of people who have to use public transportation and are walking or biking, so we try to recruit neighborhoods on thoroughfares.”

Robustelli said they put out a social media call for interested folks when an excessive heat warning has been issued and prioritize volunteers who are located in areas with a lot of foot traffic.

“We say that we’re looking for people to host cooling stations in their front yards or their driveways,” he said. “If they do that, we’ll set them up with a tent, with a cooler and misting system. If we have the funds, we’ll also set them up with water and other consumables.”

Because volunteers run the stations, they look different in each location. For example, Robustelli said one cooling station host on 28th and I streets has a cooler chained to her tree.

Alchemist CDC isn’t able to support a lot of stations because of the organization’s size. So instead the group focuses on providing supplies for the stretches of days where Sacramento experiences severe weather conditions.

Still, individuals who run each cooling station have free reign to decide when they’re open. The organization keeps an up-to-date map of its community cooling stations.

“I know some stations that are pretty much open all the time, they have the ice chest and the water all of the time,” he said. “Others set up when there are multiple days over 100 degrees.” 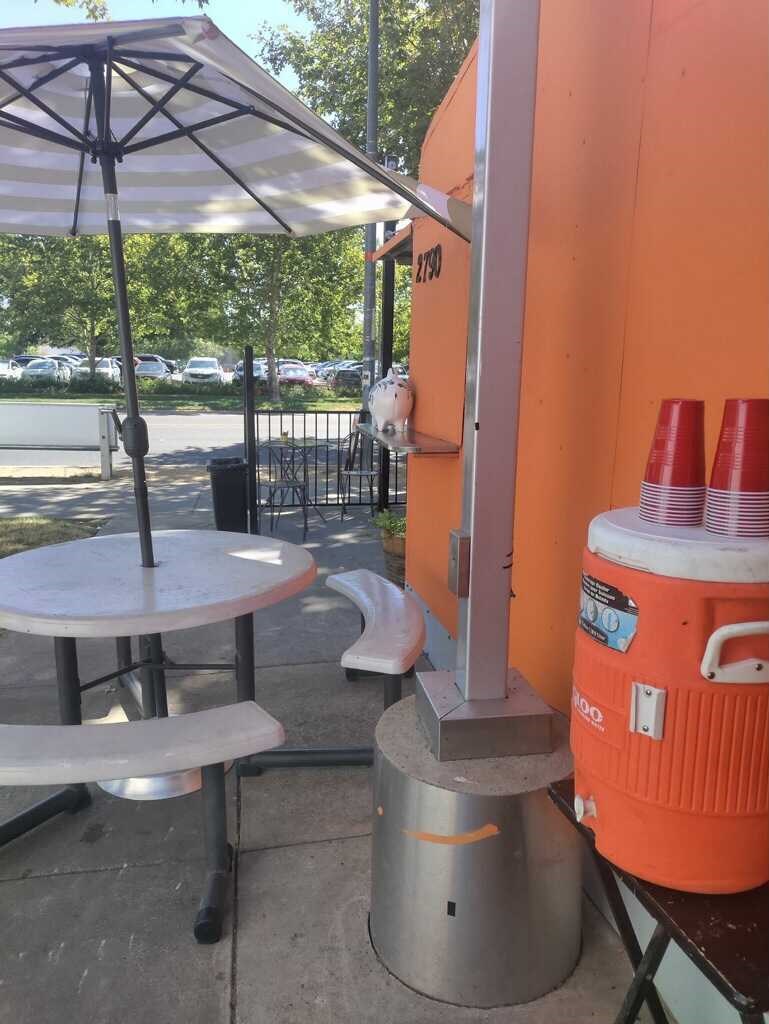 Aaron Anderson, one of the owner-operators of catering company Purple Pig Eats, runs one of the cooling centers listed on Alchemist CDC’s map. He’s located in Oak Park and has been making sure people are hydrated and fed long before he found out about Alchemist CDC.

“I’d put out water in ice chests and people in the neighborhood would come by, get what they needed or say ‘I’m going to take this up to someone in Del Paso,’” he said.

Anderson’s business — and by extension, his station — is also a place where community members who feel like they have nowhere to go can stop in. He said he also  prioritizes helping people who might be going through “some mental health stuff” to local resources.

“If we recognize someone needs help, we’ll go and find resources for them and try not to get law enforcement involved,” he said. “I try to keep myself connected with local nonprofits and things in the neighborhood.”

Even without record-breaking temperatures, Anderson makes sure that ample shade surrounds his brick-and-mortar shop, which opened two months ago.

“Between the Department of Harm Reduction Services, which is across from us, and us, we’ve just been kind of helping to keep an eye out on that corner of 3rd Avenue and Stockton [Boulevard] taken care of,” he said. “I’ve let my staff know that if anyone comes out and needs to sit down, cool off, just let them do it. If they need something, go out there and check on them.”

It’s that outreach that can be crucial to helping keep Sacramento’s unhoused residents cool during the blistering summer heat.

The voucher program “relies on outreach partners to identify unsheltered persons who would not otherwise be reached,” she wrote in an email.

But the program launches only when there are two consecutive days of excessive heat, something that isn’t clearly defined. Haynes said that temperature, humidity and air quality factor into the decision to hand out the vouchers.

While cooling centers in the City of Sacramento aren’t open year-round either — despite Sacramento Mayor Darrell Steinberg’s recommendation — the city council voted in March to eliminate the weather-based criteria that prevented the centers from opening.

You can find more information about the Alchemist CDC cooling stations, including how to get involved, here.


CapRadio provides a trusted source of news because of you.  As a nonprofit organization, donations from people like you sustain the journalism that allows us to discover stories that are important to our audience. If you believe in what we do and support our mission, please donate today.